Find the thing that's uniquely yours and cultivate it. - Deca Interview.

Deca is an NYC-based producer and rapper from Denver. As an emcee he clearly puts a lot of thought into his lyrics, with elegantly woven rhyme structures and esoteric language. However, on his new album Flux, he directs all his focus towards the beats.

Eventhough Flux is instrumental, he tells stories through vivid soundscapes and vocal audio bites from old records, movies and radio theatre. Deca samples without discrimination and channels a broad feed of content through his artistic spectrum. With the universe as his palette, he paints a colorful picture for the listener.

While letting elements of Golden Age Hip Hop act as pillars for the monument, he practices a genreless approach, reminiscent of acts such as DJ Shadow and The Avalanches. The result is an enchanting piece of sound architecture that transcends beyond the four walls of everyday life.

We wanted to know more about the man behind the music.

01. You’ve been producing and on the beat scene for quite some time, but for listeners who are new to your sound, how would you describe your music and why your style/voice are important?

I would leave it to someone else to say why it's important. But I like sounds that have a dreamlike quality. Music that reminds you of a place you've been, but can't quite place exactly when or where.

02. Tell me about the creation of, Flux. Was it influenced by events going on in your life? Who were some of the other artists you felt most inspired by while creating it? And how did you know that it was right as an instrumental project as opposed to one where you use vocals?

Yeah, I think my music always reflects what's going on in my life at the time I'm making it.

To be honest, the bulk of the music on Flux consist of beats that didn't make it on other albums for one reason or another. Or they were unfinished sketches. I went through the archives, compiled my favorites, and then reworked and fine tuned everything over the course of four months. It was mostly songs that didn't have a home that I thought were good enough to put out there. Then I reached out to producers Neon Brown, Felix Fast4word, and Man Mantis for a couple of remixes of songs from, The Way Through.

03. Is there a song off the project that means the most to you? If yes, which one/why?

I like "Space Dust" a lot. I just like the feel of the beat and the spoken word chops.

04. The cover art for Flux is bright, vibrant, and kaleidoscopic, to say the least. Who designed it? And why did you feel it fit your project so well?

I did the cover for this one and my last three albums; The Way Through, Forest Agates and The Ocean. The whole thing is a collage. It's hard to tell but a lot of the paper I used are cut up photographs of the Zip disks I use to save beats on.

There's definitely a collage element to sample based music so I think it fits well. Sample based music is a lot like collage. Depending on the beat, you're taking disparate little pieces from a handful of different sources and turning them into something cohesive. 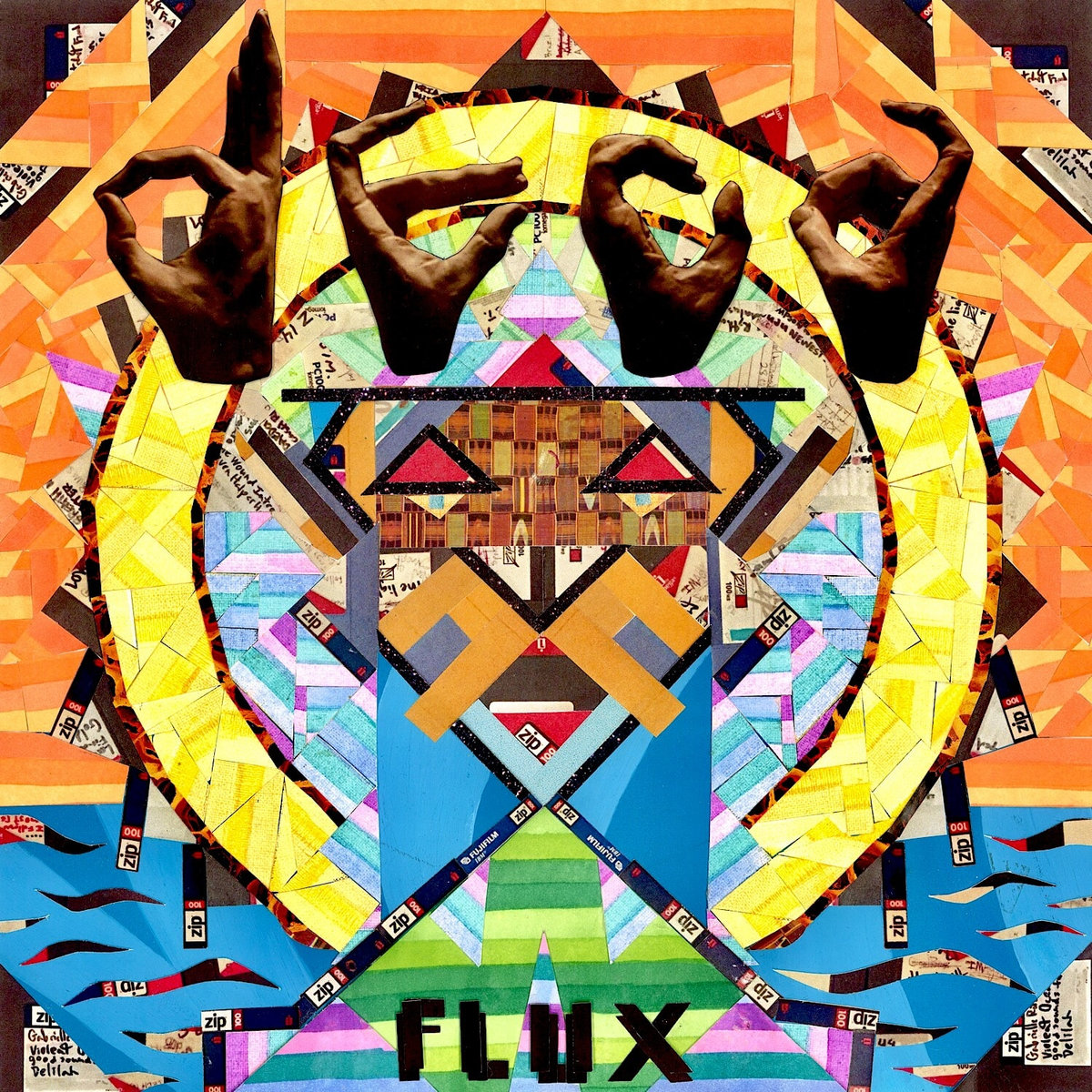 05. Tell me about your production setup. What hardware/software/microphones are the most important part of your creative process?

I have a MPC2000 XL, an OP-1 synthesizer, a Rode NTK microphone, and I use Pro Tools to record and sequence.

The MPC is the thing I use the most. The OP-1 is the most recent addition which has been huge. It's an amazing little synthesizer.

06. You’ve spoken in past interviews about your struggles with addiction, and relocating from Denver to LA to move past that part of your life back in 2008. What was your daily routine like in those early years, and what was music’s place in your recovery?

I was just trying to recover mentally. In my head I thought, I'm gonna get clean and everything will fall into place, but that definitely wasn't the case. The hardest part was starting to deal with the issues that led to my addiction in the first place, and even all these years later that's still something I'm in the process of doing. But at the time I moved to LA, I was in a relationship with a girl that got me a plane ticket out there and basically nursed me back to health. I started going to a methadone clinic and slowly weened myself off over the course of about three months. I got a job delivering pizzas in the valley and started working on what eventually became my album, The Veil.

07. What does your daily life look like right now? Are you working as a musician full-time or do you work side hustles?

I just work on music all day, everyday. I've been able to live off music for about two years now. Before that I was doing construction and working as a freelance carpenter, doing odd jobs and building sets for events here in New York.

08. What advice would you have for other producers in your genre looking to take their passion and turn it into their means of living?

Find the thing that's uniquely yours and cultivate it. I think if you do things for the right reasons and with the right intentions, opportunity will knock eventually and people will catch on. Even if you're not able to make a living off of it, do it anyway.

09. Do you think your generation–-the early millennials (born between the mid ’80s and early ’90s)—have experienced its struggles with opioids differently the late/post-milennials born 1994-2002? If yes, what would you say is the main generational difference?

I know when I first started going heavy on opiates, it seemed like pharmaceuticals had really just started coming in a few years prior. Then maybe two or three years later they were everywhere. Everyone around me was doing OxyContin, Xanax, Percs, Clonapines, Soma, Vicodins, Lean, etc. As far as I can tell, kids go even harder than we did. It's an epidemic and a lot of musicians are out here glorifying the worst impulses in us.

I know when I was going through it no one could tell me shit. So I don't think pointing a finger does a whole lot, especially because it's a deeper systemic problem that big pharma is 98% responsible for. But I'm definitely not a fan of the nihilism and shock value that a lot of artists today are pushing. Music is a powerful thing. As much as people say otherwise, a lot of responsibility comes along with the words you say and the music you put out there. I don't think you should censor your experiences, but I do think you should relay them in a truthful way.

I really appreciate the interview!

The article has been made by Niko Fox, Max I Million and Matt from Diamond Media 360.

Thank you for taking the time and sharing your thoughts and answering the questions we had. It's truly appreciated, make sure to give Deca a follow and stay updated on his releases. /Linus.