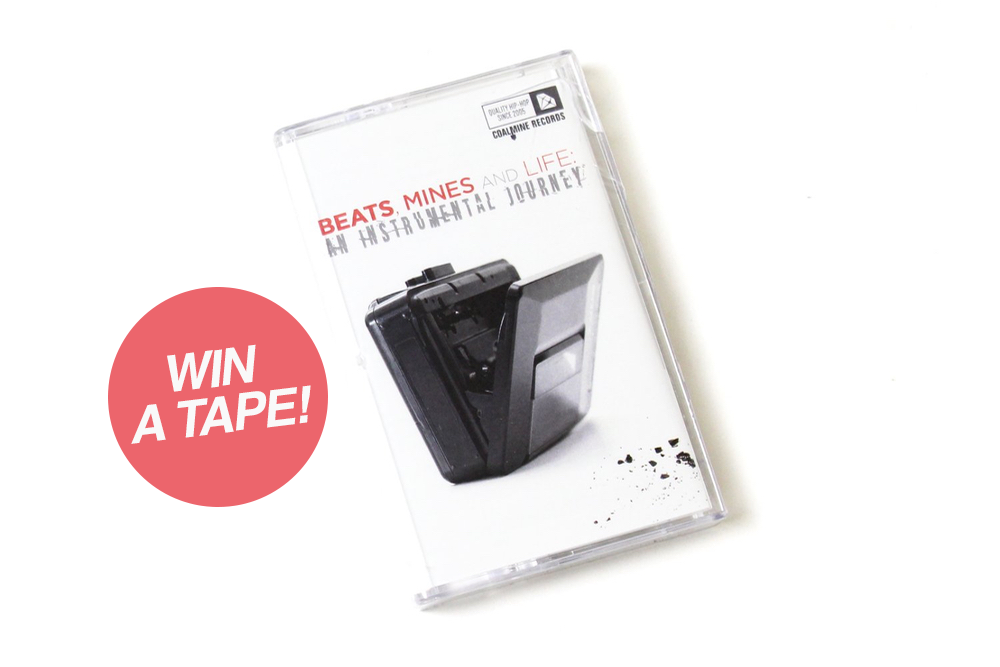 NINETOFIVE has partnered up with Coalmine Records for a Beats, Mines and Life cassette giveaway. For a chance to win, all you have to do is post a pic of your favorite cassette to either Instagram, Facebook or Twitter. Make sure to tag @coalminerecords, and use the hashtag #beatsminesandlife. One winner will be selected at random no later than Monday, November 6th, and will be contacted to coordinate delivery—good luck!

To celebrate the many phenomenal instrumentals that have landed on our projects over the years, Coalmine Records is pleased to release of our first instrumental compilation, ‘Beats, Mines and Life: An Instrumental Journey.‘

The 14 tracks on here capture the brilliance of several of the producers we’ve worked with in recent years. These include numerous living legends who have carved out a massive niche in the game, including the likes of Nottz, Ayatollah, M-Phazes, and Khrysis. Also featured are the underground stalwarts like DJ Concept, Max I Million, J57, Small Professor, and Thelonious Martin, all of whom are cementing their place in the Hip-Hop world.

The 50 minute Journey highlights both serious bangers and low-key headnodders alike. For the trunk-rattlers, we have joints like M-Phazes’ shimmering beat for Blu’s 2012 single, “Kiss The Sky,” in addition to his creeping “Midnight Madness” instrumental from Heltah Skeltah’s 2011 EP of the same name. Elsewhere, you’re bound to break your neck to Nottz’ “Atlantis” (off his ‘Titans in the Flesh EP’ with Blu), chill along to J57’s dusty “The Art of Sole” (off Aaron Rose’s 2016 EP, ‘Elixir’), and feel the soul of Thelonious Martin’s “They Don’t Know” (off his 2017 released ‘Molotov‘ LP with Saga).

Like many of our releases, ‘Beats, Mines and Life‘ pays homage to the Hip-Hop greats who have come before us. Of course, the title is a callback to A Tribe Called Quest’s classic 1996 LP, ‘Beats, Rhymes & Life,’ and a tribute to the life and art of the late Phife Dawg.

Who are you? Could you please tell our readers who Matt Diamond is?

You have been running Coalmine Records since 2005, what beat/demo/song made you want to take the step in to releasing records?

The first track I ever released was “The Raw,” featuring Saigon, Inspectah Deck and Bekay, the latter of which became our first signed artist. The track’s produced by Street Orchestra (Philly), with a B-side remix courtesy of !llmind.

I was a deejay at the time, and as an avid vinyl connoisseur, I always wanted to be on the other side of the equation, and try my hand at executive production. I remember first meeting Street Orchestra at a Beat Society party. I got my hands on one of his beat CDs, and after coming across the instrumental, I was motivated to put the rest of the pieces in place.

I thought the combination of an established legend (Inspectah Deck), a promising Saigon, and an up and coming underground lyricist (Bekay) would make for a good combination. I laid down some cuts under my deejay moniker (Dutchmaster), pressed it up on wax, and the hustle began. I’ve been putting out records ever since.

During the years with the label, what producer has impressed you the most, any anecdote you could share regarding that specific moment?

Of all the producers I’ve worked with, M-Phazes has impressed me the most. I could just vibe endlessly off his instrumentals. At the time when I’d dig through various beat CDs of up and coming, and even established producers, there’d be the occasional jewel, but Phazes’ beat tapes were just so consistently dope. Back-to-back heat, and even the joints that were “okay” would still make for incredible records.

I ended up becoming his stateside rep for a couple of years, and If I were to share one specific anecdote, it would be the time that I represented ‘em at the 2008 One Stop Shop Beat Battle which was put together by Sha Money XL and iStandard Producers. He ended up winning the entire shebang, judged by a panel of legends that include Swizz Beats, Hi-Tek, Jake One, DJ Premier, Mr. Porter, Don Cannon, DJ Toomp and 9th Wonder.

From that point on the phone calls started pouring in. The first placements after the One Stop was for Amerie (“Pretty Brown” and “Different People” were placed on her fourth LP, In Love & War), and shortly after Swizz hit me up. He said he was gonna scoop me up so we could drive around and vibe out to Phazes’ beats. Woulda been cool, but it never happened haha. Although he did record to one of his tracks, which he played over the phone.

Have you ever worked on beat making yourself, if so, what machine or program did you use?

No. Actually that’s not true. After a couple of years of deejaying, I ended getting a Boss drum machine—I think it was the DR-202. I used it more for mixtape production, but I never really got nice with it, so I scrapped it. I figured I’d leave production to the professionals haha.

Who is your favorite hiphop-producer of all time and why?

DJ Premier. His catalog is truly unrivaled. And at the time that I really started heavily collecting records, and really focusing on my craft as a deejay, around ’97-’98, Preem was unstoppable. For starters, he produced some of my favorite albums during the mid ’90s, Hard to Earn, The Sun Rises in the East, Livin’ Proof, Wrath of the Math, but also defined that era with his sound.

If so and so had a Premo beat on their album, it was getting bought. From Nas, Hov, Rakim, Biggie, M.O.P., Big L, Fat Joe, O.C., Das EFX, KRS-One, Mos Def, Brand Nubian, and Afu Ra, to All City, Krumbsnatcha, Freddie Foxxx, Special Ed, A.G., and even Sonja Blade, no other producer was quite as prolific.

The brand new album Beats Mines And Life has a real impressive line up of heavy weight producers, what track is your favorite and how did that come about?

Man, that’s a tough question. That “Atlantis” beat from Nottz has kept me in a head nod since I first heard it, but I think overall I gotta give it up for “Get Down.” There’s a good story behind that track, but I basically bartered with Pharoahe for “Clap (One Day)” off his W.A.R. LP, in exchange for him to record “Get Down” for me—which I released as a 7-Inch single for Record Store Day in ’14. “Clap” was one of the first beats I ever copped off Phazes, and from the moment I heard it, I was like, “Oh man, this is Monch all day.” Everything worked out, and Phazes went on to produce three more tracks for W.A.R.; “The Hitman,” “Assassins,” and “Still Standing.” Oh, and might I add that Pharoahe Monch is my favorite emcee of all time. But I love how Phazes chopped this up…this is what I call a soul banger.

Regarding formats, why did you choose to put this album out on cassette?

I usually like to have our releases available in some other format other than Digital/stream. So when determining the release rollout for Beats, Mines and Life, I realized that Cassette Store Day was right around the corner. And being that this was a beat-themed project, it made perfect sense to have this available on cassette.

What’s your favorite instrumental Hip-Hop album of all time?

Does Endtroducing count? lol. I’d say between that and Instrumentalyst (Octagon Beats)—Dan the Automator is on some other shit. I dunno, I like instrumental projects with a lil extra added dose of eccentricity—gotta have that rainy day vibe.

Instrumental Hip-Hop and beat based releases are becoming more common can we expect more instrumental projects from Coalmine in the future?

Sure. Instrumental projects are a bit tricky tho from a business perspective. They’re a tough sale, and most producers that have a big enough following take the DIY approach, i.e.; Alchemist, Thelonious Martin, etc. And many producers with a strong discography realize that the opportunity cost just doesn’t add up. Why produce a bunch of tracks to sell as instrumentals, when they could make more off one track placement. But I think it’s fair to say that I’d be inclined to drop a fresh instrumental project after every cycle of releases where we’ve amassed enough content to curate a tracklist worth of gems.

Is there anything more you would like to add for all the producers and readers out there?

First off, in 2017, most of us have a shorter attention span than a goldfish, so salute to whoever made it this far. lol.

And producers—it’s cool to sell your beats and make money off your craft, but find an artist you really believe in (and an artist that believes in you), and make dope music. Learn how to produce records, and not just make beats. And stop wasting time with that mediocre emcee that’s gobbling up all your dope beats. It’s time to value your time and your craft.

But be sure to follow Coalmine online and visit our site to get familiar with our catalog. We’re a very producer focused label, and since 2012, all of our releases follow the one emcee/one producer formula; Blu & Nottz, Sean Price & M-Phazes, Planet Asia & DJ Concept, Guilty Simpson & Small Professor, Saga & Thelonious Martin, etc.

And for those interested in a copy of Beats, Mines and Life on cassette, they were sold out for a minute, but are back in stock via Fat Beats: http://bit.ly/BMLCassette

Thanks for taking the time for the interview!

Beats, Mines and Life is now available through all digital outlets and streaming platforms, and arrives in time for Cassette Store Day 2017 (Sat, Oct. 14) in limited quantities. Order your limited edition copy today!