by Luciano Brougham
in Uncategorized
0

The life of a working musician is often glamorized, but reaching the point where you can support yourself strictly off of music isn’t easy.

New York’s Brandon Rowan — best known by his stage name Birocratic — knows this all too well. Despite first breaking out in 2013 when a still-nascent Buzzfeed Media used his Creative Commons tracks in over thirty of their videos, he has had to work hard to become self-sustaining. But last January, he finally reached that point, and he’s running with it.

His success isn’t surprising, though. Birocratic’s music seamlessly bridges several instrumental genres — including upbeat future-funk, electronica, and jazz-infused boom-bap. Not that he would pigeonhole himself into any one genre; in the Soundcloud description for one of his latest releases, he characterizes his overall sound as “laidback slappers”. The description is apt, especially considering that the majority of Rowan’s tracks are grounded by rolling basslines that he slaps out on his Fender Jaguar bass.

Birocratic is currently working out of his home studio in New York, where he’s cooking up a slew of new releases in between rounds of touring the United States. NINETOFIVE caught up with him a few weeks ago to get the untold stories behind vacationing with his friends at Chillhop Records, his transition to working as a full-time musician, and his minty new single “Extra Fresh”. Don’t sleep.

You recently posted pictures from your vacation with Brock Berrigan, Philanthrope, and Bas from Chillhop Records. How did the four of you initially meet?

I think essentially we were all just mutual fans of one another. Brock and I connected in person once at a beatmaking workshop in Brooklyn, and we’ve been friends since. Bas — the owner of Chillhop — reached out to me a few months later about working together on getting Chillhop Records off the ground. And then I met Philanthrope through working with Chillhop. The first time all four of us met in person was at a show I played at Mercury Lounge in NYC this past December. Bas & Philanthrope were visiting the city for about a week to take some meetings, so we all met up and then rented an Airbnb together in the Catskills Mountains. We were initially supposed to go for only four nights, but it turned into six nights because that place was dope.

Do you have any good stories from your vacation together?

So many. We would spend all day doing work and making beats and then we’d stay up till 8:00 AM chilling, talking, producing, playing drunk ping-pong, you name it. I popped a bottle of champagne in an outdoor hot tub at 4am in zero degree weather. And we had a wood fire burning consistently for the entire week. It was fucking awesome. All my clothes smelled like a campfire when I got home. Incredible bonding experience.

And being in nature has always been a key part of your creative process, especially back when you were spending all your summers away from the city in Cape May. How would you say creating there was different from creating now that you’re working out of New York?

Well, Cape May used to be a huge part of my identity. I was studying at NYU, so my summers off from school would be spent down at my family’s house in Cape May and I’d work full-time serving tables to make the cash I needed to come back to NYC. Being in there always put me in a crazy headspace. I didn’t have anyone down there I could really talk about music with, so I’d basically make friends with all the open spaces in town where I could go and reflect on my own. It was a very solitary experience, and I made some pretty introspective music. And on one hand, I’m glad to be out of that transient phase of my life — I’m in NYC now for good now. At the same time, it’s hard to find the mental space to really sit down and listen to my heart. There’s just so much noise here, both mentally and environmentally.

You’re all-in on music production now, also. How did you know it was time to quit your 9-to-5? And what was it like breaking that news to your family?

Honestly, I’d been working towards going full-time for the last five years, and it’s been a relatively slow burn. I started out making pennies, then a legitimate supplemental income, and eventually I was actually able to support myself. I quit my job during the quiet season; working for tips becomes pretty rough in January (especially in a beach town), so it’s not like I was missing much. Plus I’d been saving up by crashing with my parents. I went to NYC and spent two months living on savings before the money caught up and I realized I was good to go. I literally was on the schedule to train as a bartender back at my old restaurant when I had to call them up and tell them I wasn’t gonna come in. That was a freaky phone call, but it’s worked out. And my family was thrilled when I told them — they know it’s something I’ve wanted for years now. They’ve always been supportive, but I think living in NYC on my own dime kinda proves to everyone how serious I am. 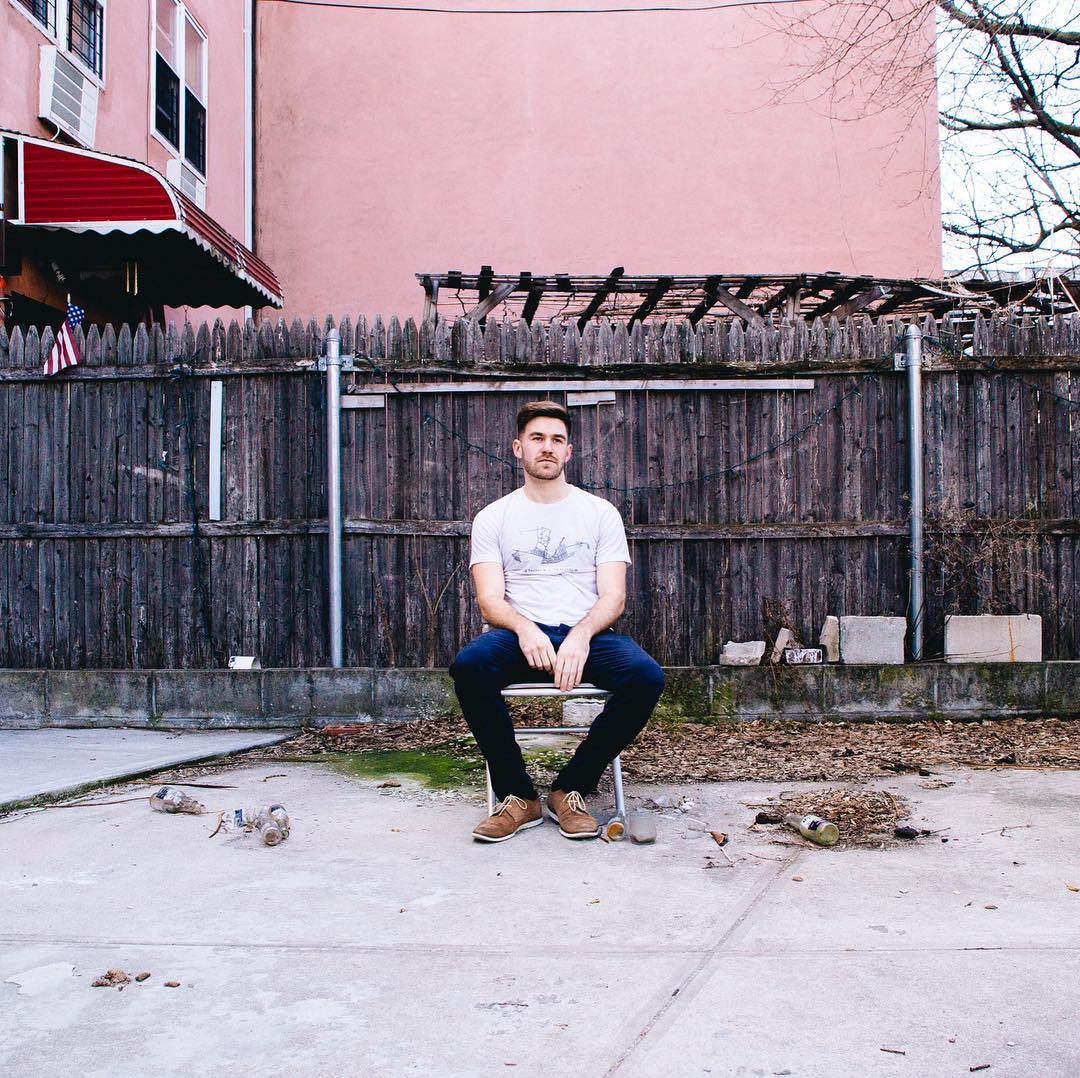 Yeah, 100%. First off, I’m legitimately just better than I was 2 years ago. I’m also not sampling as much anymore, I’m more involved in collaborative projects than ever before, and I’m finding a lot more joy in writing/producing with others than I used to. I think it just came down to being in NYC and finding the people I have chemistry with. Shit works out a lot easier when you can fully trust your creative partners to find gold. I’m feeling a lot better about my work than I have previously. I get crazy insecure about my music — I think a lot of producers do. But it’s more important to just take what you’ve learned making one track, put it out, and apply that to the next.

I use Ableton 10 now, plus a 49-key MIDI controller, a launchpad, a couple pad controllers for drums, a UAD Apollo Twin interface, and my trusty Fender Jaguar bass. It’s a Japan-only issue, and it sounds like flames.

The mouthwash aesthetic you used for “Extra Fresh” was really striking. What’s the story behind that track?

“Extra Fresh” was my first song to drop in 2018, and it took a bit of a different direction for me. Musically, it’s much more dance-oriented than my other recent work. I’ve been inspired by old commercials from the 90’s — they’re so over-the-top. They don’t even bother hiding how terrible they are. It’s just crass, useless hyperbole, and I always cringe at how shamelessly capitalist those ads are. So that’s kinda what informed “Extra Fresh” – it’s an infomercial from an alternate universe. There are all these insane claims about what mouthwash can do. Yet if it aired in the 90’s, no one would’ve batted an eyelash. When you take all the absurd shit that’s out there and put it in an unexpected context, you quickly realize how ridiculous the world is.

What other projects could we expect to hear from you in 2018?

I just dropped my latest single “Handsome People” for the Chillhop Essentials — Spring 2018 compilation. And I’ve got another single coming soon – in the same vein as “Extra Fresh,” but even fucking better. Plus some hot remixes for a couple people I genuinely look up to, so that’s gonna be ultra fun. Collab EP with Queens rapper Akinyemi, I‘m providing the production on that. Couple one-off collabs with other producers I dig. It’s gonna be a prolific year, and on top of that I’m taking my live show on the road a bunch more. Cannot wait for that.