Ask any Millennial or post-Millennial and they’ll tell you: going to college and university no longer guarantees success.

Chillhop producer and visual artist RudeManners — born Dalton Mannerud — had exactly that experience. He pulls no punches about his disillusionment with higher education: "I personally hated college." A multimedia artist since childhood, he found that the coursework and dull rigour of academic life stifled his creativity — both as a producer and as a visual artist. Feeling cut off from his creative outlets took a personal toll on him and when a family emergency came up, he knew the time was right. He left without looking back.

Leaving school hasn’t been a roadblock for him, though. Since he left university, his passion and drive for drawing has come back in full force and he’s become one of the go-to designers for instrumental producers around the world. His musical output has also ramped up; he’s since dropped well over fifty songs and a slew of full-length projects, racking up thousands of plays on streaming services in the process. And along with his childhood friend too ugly, he’s a co-host of Radio Steez, an emerging pop-up radio station that focuses on promoting emerging and established beatmakers.

NINETOFIVE recently caught up with RudeManners to learn in-depth about the origins of Radio Steez, why he decided to drop out of university, and how he then impulsively moved to New York City. His latest tape — "Do Not Disturb, Vol. 1" is also out now, featuring Es-K. It’s atmospheric, wavy and an excellent gateway to his sound for those who haven’t heard his music before. Take a listen below and get to know him.

Tell me about how you initially got involved with Radio Steez!

I first got in contact with Steezy about a year ago. He was holding a banner contest and I drew something that he ended up loving and hit me up. We ended up talking all the time about art, music and whatnot, and we actually became good friends. I help him with art when he needs it and also help him run Steezyasfuck here and there. And for the past couple months we had been talking about doing a podcast or a radio show and putting it under his Soundcloud. So too ugly and I went out one day to get all the gear, microphones, audio box, and whatnot. We brainstormed for a week or so, came up with the name Radio Steez and the rest is history. 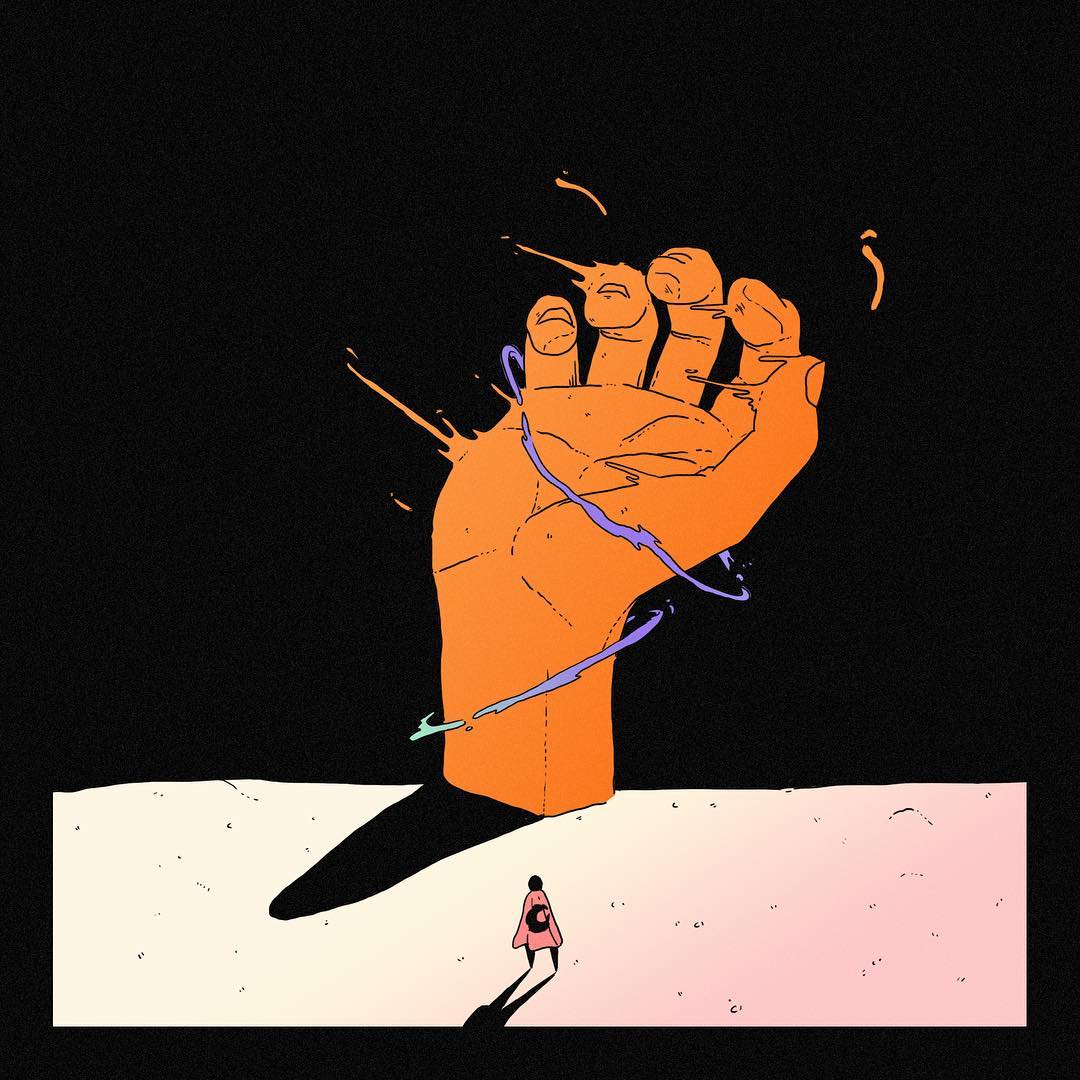 That’s crazy. Where do you envision the Radio Steez platform growing in the future?

I want to see Radio Steez eventually on Spotify or AppleMusic one day. It would be so crazy to have fans tune in live to just listen to songs I’ve gathered and curated. But we definitely need to keep practicing, we’re still learning the ropes.

You’re also obviously a well-known graphic designer in the online beat community – are there any pieces of graphic design you’ve done that mean the most to you?

Man… that’s so tricky. I honestly don’t think I can pick any single piece. Every one I make represents me at the time I made it and we as people are always changing, so they all hold an equal place in my heart. 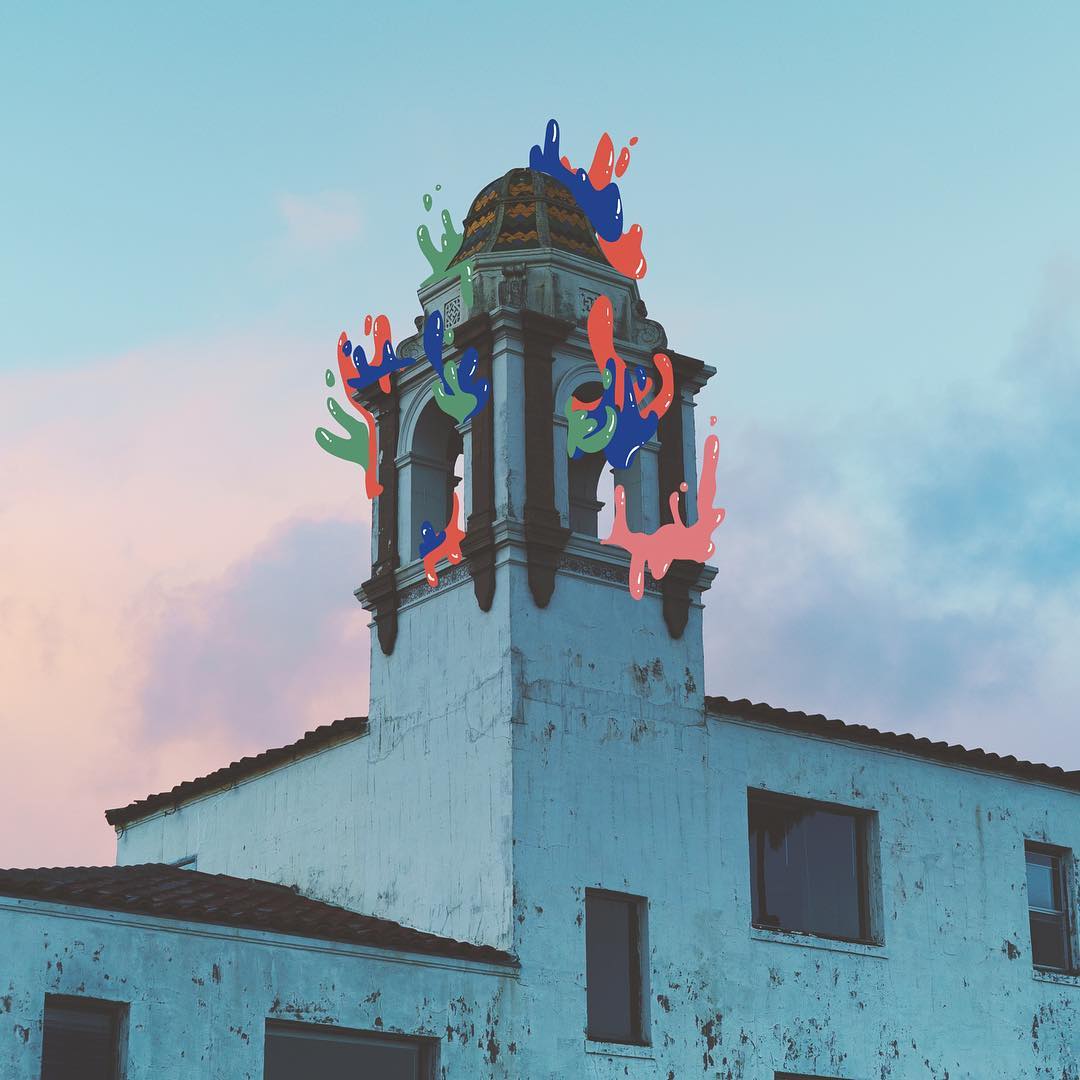 You’ve spoken before about dropping out of a graphic design program after a year to pursue your own creative work. How did you come to that decision?

So I attended SUNY Plattsburgh, which is located at the border of Canada and New York, a.k.a. the middle of nowhere. In high school – for some reason – I had a weird dislike for the city; I only wanted to have an adventurous, outdoor lifestyle my whole life. So I thought I might as well go to a school with just that lifestyle. But once I got there, I hated it. And while I was attending, I also managed to get turned away from art; I think I went around 8 months without drawing a single thing for fun. Some of my art classes were awesome and pushed my creativeness, while others would shun any creativity I had.

So overall, my experience there the first year was not great. I decided to try and stick it out for a second year, but then I found out my dad –– who by choice hadn’t talked to me in over a year at that point –– passed away. And then a couple months later my mom got really sick and was in the hospital. Obviously, I went home to help take care of the house and help my stepdad take care of her. And during that time I finally made the decision to drop out. I had gone through too much shit; I needed a mental beak and to not have any more stress from school on my shoulders. 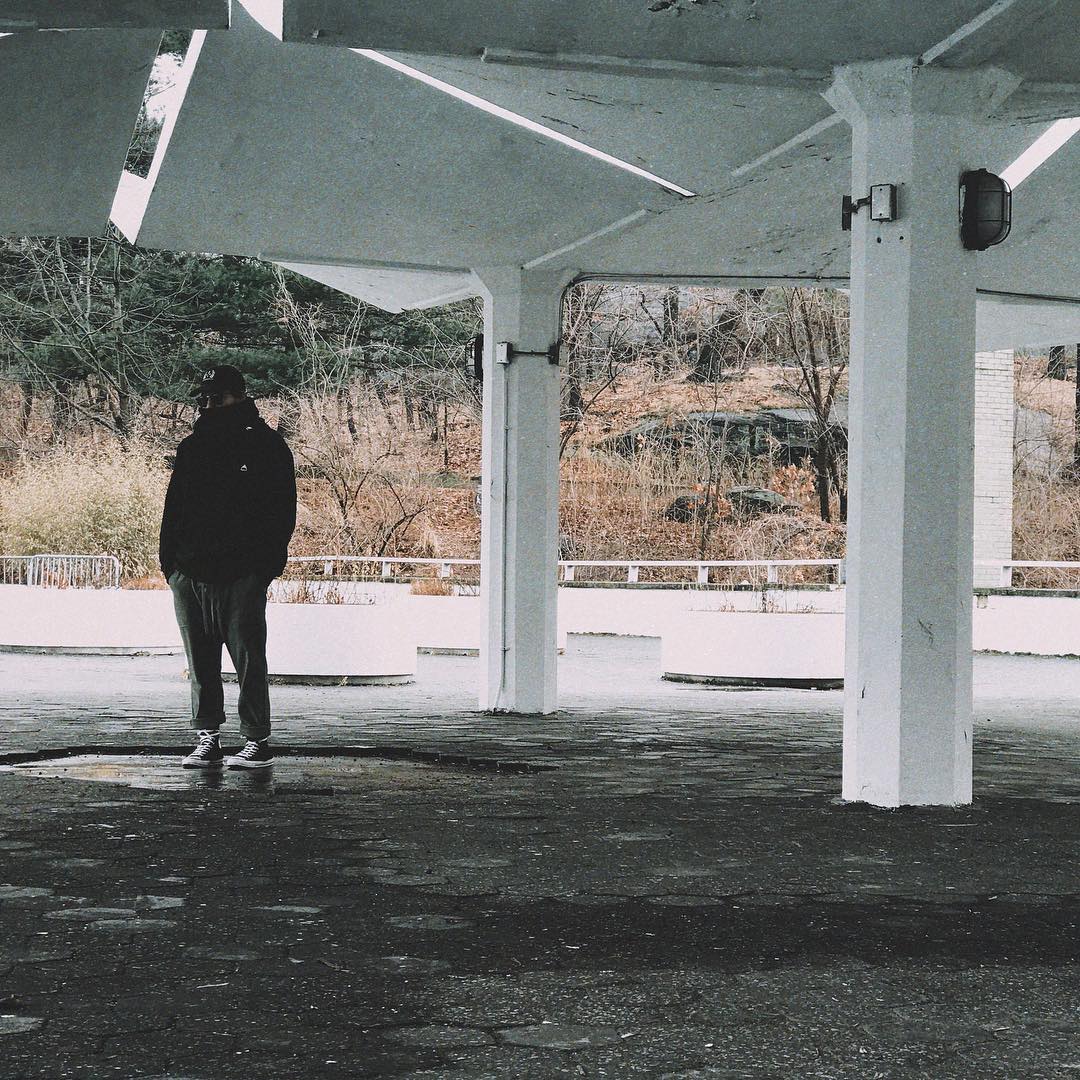 Why do you think so many creatives — such as like yourself — feel stifled in college and university?

Well, I think many creative people are turned away because even though colleges and universities do help you stay creative, they still are teaching you to stay inside the box. They don’t push to go outside the lines and do something new. Personally, I think most creatives hate being told what to do and are attracted to being and doing things on their own. That being said, I have a very different way of looking at college; some may agree and some may not. It’s just my opinion.

And before all that, you and too ugly were raised in Windham, in upstate New York. What was life there like?

Well, Windham is an extremely small town, so growing up there was… interesting. Our high school graduating class was only 28 kids, so everyone knew everyone. I moved there when I was around 6 or so after my parents got a divorce. It was just my mom and I for most of the time, and while I didn’t have a crazy amount of friends, I did have a few good ones. Dylan –– too ugly –– was someone I grew up with and was one best friends since the day we met. We actually learned how to produce together. I still remember the day that he brought over his laptop and cracked version of FL that he found and showing me. I still remember just staring at the UI for about 10 minutes having no clue what to do. We ended up getting a little better after only a couple years –– although Dylan advanced way before I did. He was actually pretty big in the Riddim scene, so we were huge dubstep fans before getting into lo-fi.

How did you both end up in New York City?

After I dropped out of college and moved home without any idea of what to do with my life, I got a call from Dylan. He told me he had just got a new apartment in NYC and that there was a room available if I wanted to take it. I had to think about it since I had no job lined up at all, but I made my decision almost instantly. It was probably one of the only opportunities I was gonna get at the time, so I decided to make the move and hope for the best.

There is actually a decent beat scene in the city, I wouldn’t say it’s huge though. I do see tons of kids I know from Soundcloud, Twitter and Instagram playing shows out in Brooklyn all the time ––  shouts out to inplainsight. I haven’t been here that long, so that’s pretty much the only beat scene I’ve really noticed so far, but it might just be because I haven’t been exposed to it yet. 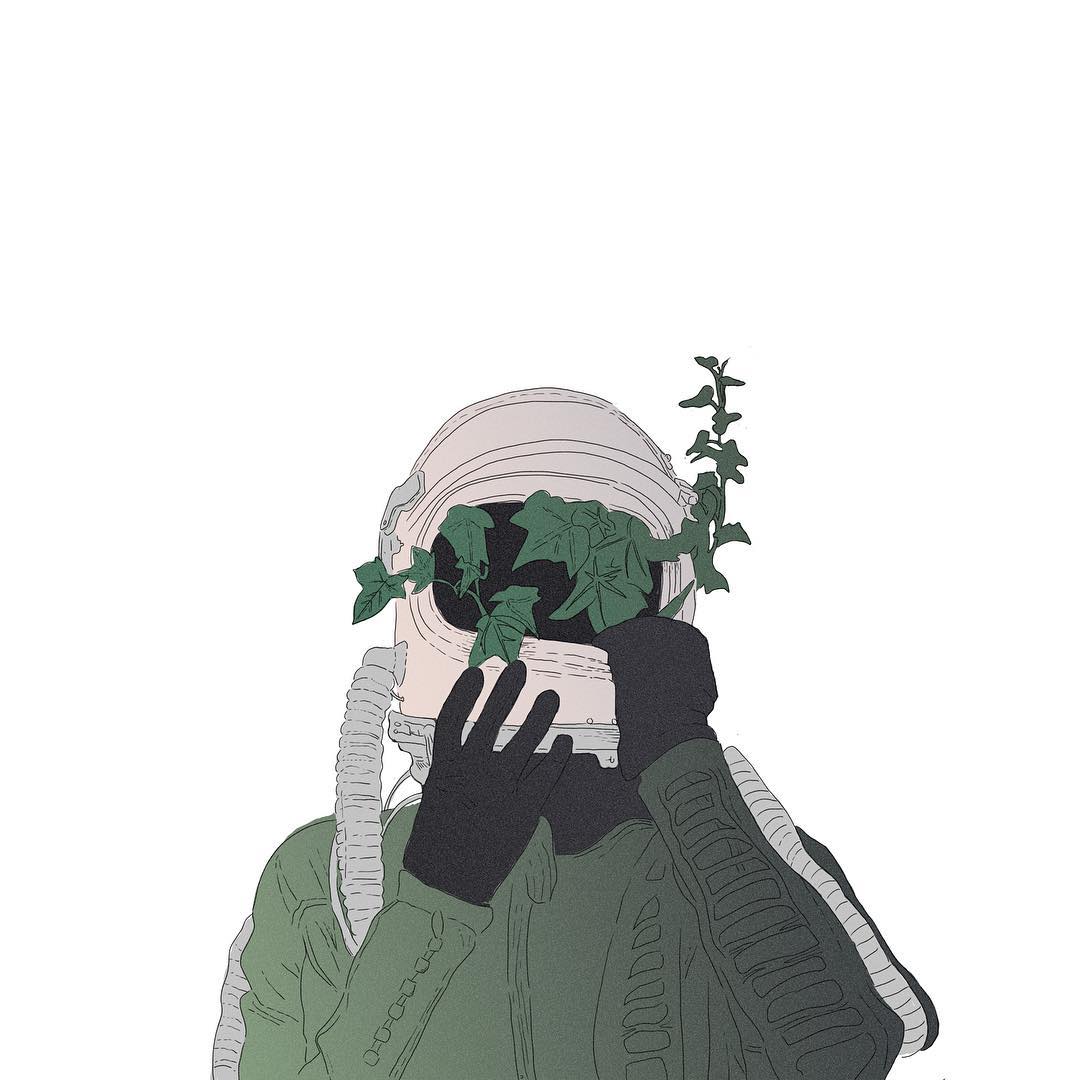 That’s fair. It’s tricky finding a scene where you feel at home, especially when you’re still adjusting to being in a completely new environment. Are you finding creative inspiration more easily now that you’re in New York City, or was that easier back in Windham?

Honestly, I think I can find inspiration no matter where I am when making music. Being upstate in the mountains was really amazing when producing; it gave off such a different mood and vibe compared to living and producing in the city. Being able to sit outside on my picnic table with not a soul around, listening to the sounds of nature, and just sitting back and relaxing was something I really do miss. But to be honest, doing that everyday got extremely boring for me, I needed more to do. And I get that from New York City.

What projects can we expect from you this year?

Right now I’m finishing up my second full length album "Avant Garde" which will be dropping as soon as possible. It features 14 tracks, which I personally think are some of my best. I don’t think I can share who I’m releasing it with yet, but I’ll be sharing that as soon as we clear some things up. I’m also working on another small beat tape series called "Do Not Disturb". I just dropped the first tape in the series, it’s out now via Steezy and my Soundcloud. And artwork-wise I’m starting to learn animation, which ‘I’m having a load of fun doing. I want to do a full music video for one of my songs on the album but we’ll see how fast I can learn it.